The Nigerian Middle-class Everyone Should Worry About

Recently, a Ph.D. candidate friend came to Lagos on field assignment for research work; studying the trends of migration in Nigeria with the specific focus on migration rate, the location of choice and the class and profession of migrants. I was opportune to proofread some of her findings report and I was alarmed by the rate and class of migrants leaving Nigeria. 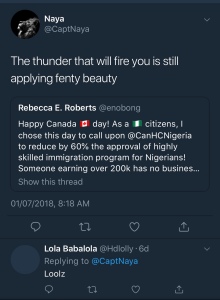 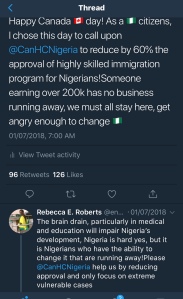 The preferred location of choice was Canada through the Canadian express entry for highly skilled immigrants, but what was distressing about her report was that the class of people leaving were not necessarily having a hard life in Nigeria. Secondly, the occupation of those leaving Nigeria meant that in less than ten years, Nigeria will have a huge deficit in its medical, education and finance field. Further, this report also found that the approval rate for Nigerians was declining and not only that, it was beginning to negatively impact US visa approval rate as well.
Following this, without giving it much thought, on Canada day, July 1st, I tweeted that the Canada government should reduce the approval rate of migrant visas for Nigerians by 60% and that also, the program should give preference to applicants below a certain income gap and the social media sphere went crazy on me. Up until this time, I was slightly ignorant of the fact that the average Nigerian, I mean the majority are seeking a way out of the country in pursuit of the Canadian dream. What I cannot seem to understand is the assumption that life is necessarily better abroad. And the entitlement connoted by the backlash I got is fueled by the idea that the West owes poor countries something and must pay for the failures of our bad government.  We seldom forget that these countries have their own issues too and were not always this functional and good governance was enforced by their citizens who were angry and frustrated enough to force a revolution. As such, Nigerians who do not have to leave are the ones leaving in droves and therefore should be restricted because the change Nigeria needs will require more of the standard income earning set of middle class because the lower income earning middle-class demography are slowly slipping into poverty and are the class every economist and development expert should pay attention to.
For long, the Nigerian middle class has been a class of people economically living a lie; living paycheck to paycheck and spending everything they earn. More recently, the poor economic management and the self-inflicted challenging times of the Buhari government divided the Nigerian middle-class into two groups;

In February 2018, the Poverty World Clock hypothesized that Nigeria had overtaken India to become the new global headquarter of the nation with the highest number of absolutely poor people. While this hypothesis is not back up with field research, it is relevant to note that, taking into attention the downward spiral the Nigerian economy has taken since early 2017; the job cuts, job loss, factory close down, the harsh policies such as arrest of street traders inhibiting the poor from generating their own income and forced evictions across Nigeria which is rendering hundreds of thousands homeless and without stability to continue their livelihood practices. Any business that depends on importing raw materials has been struggling since early 2017; laying off staff and at extreme cases closing up. For example one year after setting up a $300 million factory in Agbara, Ogun State, Procter and Gamble has shutdown due to the government policies making sources and getting raw materials into Nigeria challenging and economically unreasonable. Over 300 employees are being gradually laid off in preparation for a final shutdown. Evidently, more Nigerians are shift demographies from the weaker middle to relative poverty. The impact of this will affect ability to access healthcare and greatly impact school enrollment and attendance. Whether or not the Poverty World Clock is a clever hypothesis, it is clear to see how Nigeria rapidly became the home to the highest number of the most vulnerable poor people globally.

In analyzing the current welfare climate in Nigeria, what quickly becomes apparent is that the lower middle earner who has now been forced into vulnerability are slipping into relative poverty, while the former relatively poor demography is shifting into absolute poverty.
It is this set of middle-class that economist and development expert must begin to pay attention to, as ignoring this class is detrimental to Nigeria’s growth and development.
In a country that citizens buy and pay for everything they still pay the government for, it is imperative that as many people as possible are harnessed to generate their own income.

If Nigeria is remotely serious about achieving the SDG goal, 1, 2, 8,10 and 11, the government must begin to stop and pay attention to how the policies are creating more inequality and poverty, and device interventions to support and not inhibit income generation as well as slum upgrades and not forced evictions. Because any policy that bans and imposes sanctions on informal activities as opposed to creating management structures to support is unwise.

1 Response to The Nigerian Middle-class Everyone Should Worry About